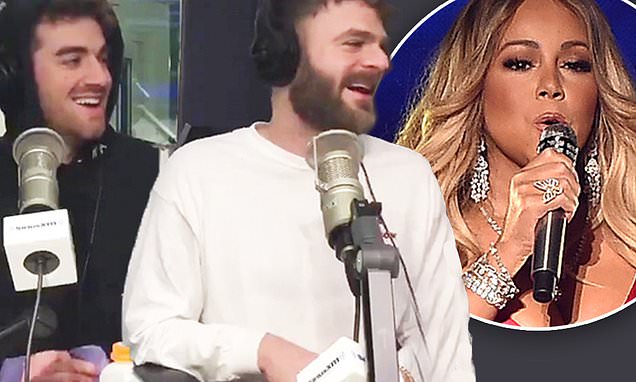 Would you recognize your favorite artist or band if you had the opportunity to meet them face to face? How about if they were The Chainsmokers? Unfortunately for Mariah Carey, she had a little trouble identifying the electronic duo. According to a story, Mariah Carey doesn’t know who Andrew Taggart and Alex Pall, AKA The Chainsmokers are.

During a segment on SiriusXM’s “The Morning Mashup” this past Wednesday, The Chainsmokers stated that Carey had confused them for another group! Here’s a snippet of how the awkward mishap went down:

Alright, everything has gone smoothly but wait what happens next…

One Direction? We get that both One Direction and The Chainsmokers are both made up of male artists but their music genres are pretty distinctive. Plus, their contrasting accents are a dead giveaway. Additionally, as we all should know, One Direction is made up of four members while The Chainsmokers is just Andrew and Alex. Since Wednesday, Carey has responded to the uproar and left a great response on Twitter saying “@TheChainsmokers of course I know you!!”.

.@TheChainsmokers of course I know you!! I love your song “that’s what makes you beautiful”! ?? https://t.co/CZsK0DzoYb

Any hard feelings are gone between the three artists, leaving them with a good joke for years to come. Unfortunately, Carey has had a history with ‘not knowing’ some talented artists/bands. In 2018, she stated she didn’t know Jennifer Lopez but as we know now, it was intentional. Take a look at a video from SiriusXM with The Chainsmokers below.

The Chainsmokers on SiriusXM Radio

At an award show, @TheChainsmokers were SO excited to meet @MariahCarey.. but things got real awkward real quickly. pic.twitter.com/HuXd4MyU1A