In the wake of its data privacy scandal, Facebook is taking drastic steps to improve its image. One huge issue means working with experts on their privacy policies and collection of user data. However, in a more immediate, aesthetic fix, they are beta-testing a new all-white user interface (UI) with Android products. The sleeker, a more up-front design may be in response to the recent firestorm that has hit them in the past year.

The Facebook all-white interface would replace the blue bars that currently exist in the app. This appears to be in conjunction with their new “privacy-focused platform” initiative. This seems like suspect timing for a brand new UI amid all the allegations and evidence of data collecting.

Here are a couple of screenshots of the revamp: 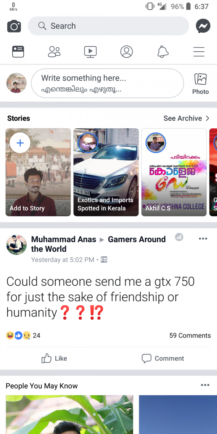 The questionable timing appears to be a ploy to soften their public image a bit. While it does coincide with the recent Facebook Messenger UI release (also all-white), a lot of time is being devoted to what amounts to a cosmetic face-lift. Complicating matters further is the release of Facebook Dark Mode. This update allows users to utilize Facebook Messenger with a completely blacked out UI. Seems strange, right?

Skeptics remain critical of Facebook amid the allegations. CEO Mark Zuckerberg has publically addressed concerns, but time will tell as to what tangible actions are taken. For anyone not familiar with the allegations against Facebook, this article provides a great synopsis.

Are you a believer? Here is a quote directly from Zuckerberg:

“I understand that many people don’t think Facebook can or would even want to build this kind of privacy-focused platform — because frankly we don’t currently have a strong reputation for building privacy protective services, and we’ve historically focused on tools for more open sharing. But we’ve repeatedly shown that we can evolve to build the services that people really want, including in private messaging and stories.”