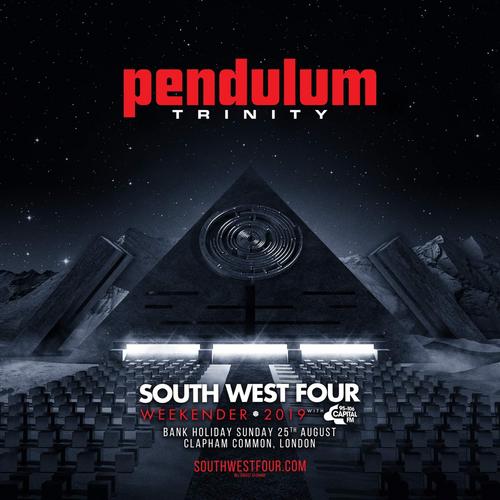 The London festival South West Four just announced Pendulum to substitute for The Prodigy after the passing of Keith Flint. The band will be performing a new live production titled TRINITY and incorporating both elements from live and DJ shows.

TRINITY will see three members of the band. Rob Swire, Gareth McGrillen, and Paul Harding (AKA El Hornet). Fans can expect to hear some new content from the group!

According to South West Four:

“You will get to hear them play brand new Pendulum music from their forthcoming EP series and album, which fans have been waiting for with baited breath, with the trio surrounded by the kind of breath-taking production you have come to expect from these pioneers of electronic music.”

“Pendulum’s Trinity World Tour will be taking in performances across the UK, Europe, North America, Asia and Australasia in 2019 & 2020 with SW4 this Summer being the OFFICIAL DEBUT of this exciting new chapter in the Pendulum history books.”