HomeEventsWTF?! What The Festival Will Not Return In 2019
EventsMusic News

WTF?! What The Festival Will Not Return In 2019

What The Festival (WTF) has announced on its Facebook page and website that the festival will not be returning in 2019. The Durfur, OR mainstay was launched in 2011 by Glen and Tiffany Boyd. After life-altering experiences at Burning Man, they created the popular Oregon festival as a result. Disappointment replaces anticipation of the event’s return this year after its cancellation in 2018. It appears the 2017 party was really the last one.

News of WTF’s 2019 cancellation goes back to late February. Redditors anticipating the festival’s return were waiting for the details and seemed to press Glen into an unofficial statement:

The late June dates – when the event normally – takes place are fast approaching. With this, they have finally admitted that What The Festival will not return this year. A simple and to the point image (above) is now visible on the website and Facebook page. Similarly, they are using the same method from announcing the 2018 cancellation seen here: 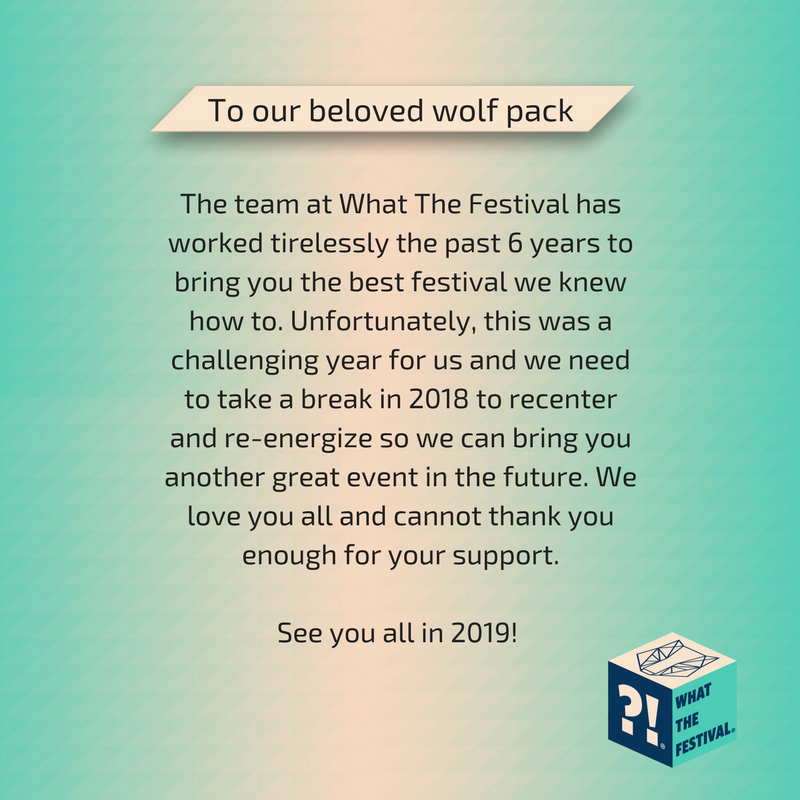 Few other details have come about the demise of WTF. Festival founders Glen and Tiffany haven’t had much to say. This shouldn’t come as a surprise as even the most ardent supporters’ knowledge is scarce. Although, in a Magnetic Magazine interview in 2016, Glen made this statement about the biggest challenge facing the promoters:

“Festival production is tricky. As producers, we are constantly having to maintain the balance between becoming financially sustainable and not losing the heart and soul of the festival. The challenge is always present and we take it into account when planning for growth.”

That’s a very ominous statement. Consequently, it makes you wonder if What The Festival will ever return. Just a couple of years before, in a 2014 interview with Willamette Week, they celebrated finally reaching financial sustainability. Regardless, it appears the ‘mecca’ of self-proclaimed Peter Pans has finally come to an end.