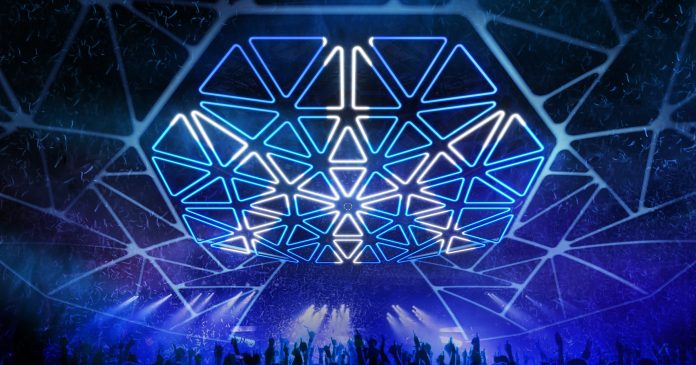 Over the past weekend, more than 450,000 people attended EDC Las Vegas to party under the electric sky. Many new friendships and memories were made throughout the 3 day festival. However, before the festival even began, Hakkasan Group took it a step further and already brought the electric sky indoors during Tiesto’s Thursday night party at Hakkasan Nightclub.

So how exactly did they do it? Hakkasan Group has brought in a futuristic multi-million dollar grid of light installations in its renowned nightclub located at the MGM Grand. Titled the Hakkasan Grid, it was engineered by German company WhiteVoid and is the largest permanent kinetic light installation in the United States. The 30 foot sculpture is a massive spectacle in person. Constructed from 57 state of the art 3D printed triangles that are 4 feet in height, they provide attendees with a truly innovative clubbing experience. Coded using Hakkasan’s proprietary software, the triangles are able to change colors and transform to create a revolutionary sight to see.

In a recent press release, here is what Hakkasan Groups’ executive vice president of entertainment James Algate had to say:

“The nightlife industry requires constant evolution and excellence, and we pride ourselves on consistently rising to this challenge and providing our guests with unforgettable, transformative experiences,” Hakkasan Group’s executive vice president of entertainment James Algate is quoted in the press release. “We’re thrilled to yet again push the boundaries of nightlife with the new Hakkasan Grid. We’re confident that guests will be blown away by this futuristic, multisensory experience we’ve created.”

And what better DJ was there than Tiesto to launch such a grandiose project the day before EDC?

Luckily for EDMTunes, we got the chance to see everything in action on the launch day. Walking into the main room, thousands of eager attendees were rocking out in the famed night club. Amidst all of the bumping tunes stood the Hakkasan Grid showering an infinite amount of shapes, lights, spectrums, and, figures down onto the guests. While standing under the installation, I experienced a full-blown sensory overload of euphoria. With Tiesto as the pilot in the soundwave department, the Grid took full advantage of all the music – flawlessly transforming to match every beat. From a warping vortex to a spiraled out web, the optical illusions are something that has to be seen in person to do them justice.

With the addition of the Grid, Hakkasan Nightclub is set to revolutionize the nightlife experience and push the standards of technology to the next level.  If the modern aesthetics of the club wasn’t awe-inspiring enough, the grid will no doubt bring it up to the next level. Future shows will fully integrate the system changing the nightlife experience in Vegas. The full schedule of star studded DJ’s coming to play can be found here. This is just one of the reasons why it is one of the premier clubs in not only Las Vegas, but the world. Hakkasan Group’s vision to excel and provide the best experience for its guests is world class. Next time you stop by Las Vegas, be sure to check out the Hakkasan Grid to see it for yourself!