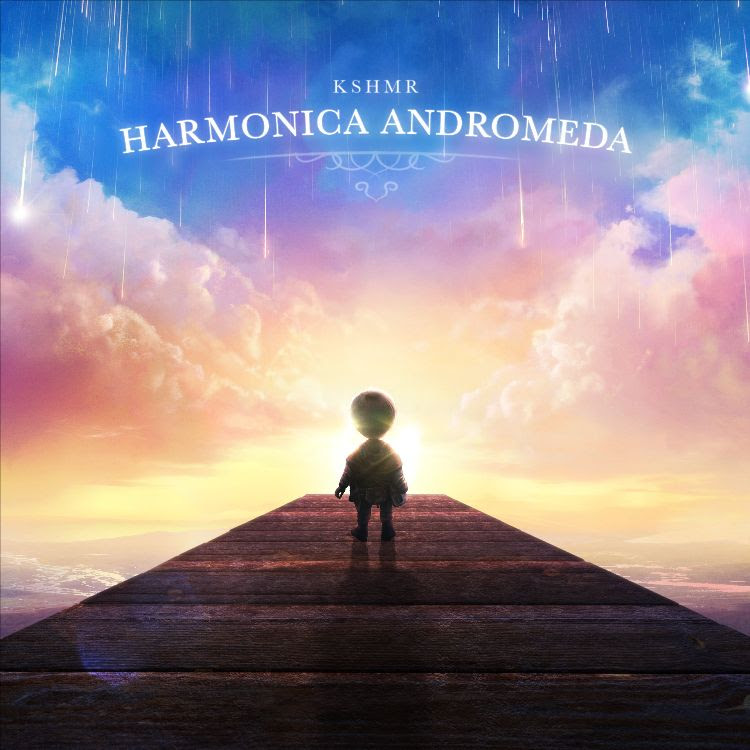 KSHMR is an artist who needs no introduction. If you’re a fan of his, today may very well be one of those days you’ve been looking forward to for quite some time. If not, this is a day you might just become one. Today marks the release of KSHMR’s – real name Niles Hollowell-Dhar‘s – debut album, ‘Harmonica Andromedaon‘.

In the past, we covered the announcement of this album and were rather surprised at the hype. In his own words, Niles had the following to say:

“My debut album is one of the most ambitious, maybe even one of the best electronic albums of all time… I know it sounds crazy but I just can’t imagine anybody else taking you on a journey quite like this, or even trying”

Despite his deep roots embedded in EDM, these are big words to be said. As a KSHMR fan, this is something I believe possible, having known just how deep his producer chops run. As a music journalist, I’m iffy, but I’m willing to give it chance, and I hope you do too!

Taking inspiration from the emotional, moving power of movie scores, KSHMR’s ‘Harmonica Andromedaon‘ follows the journey of a young boy who has just lost his mother. Upon her passing, she leaves him instructions to “embark on an adventure exploring different worlds”. Through ‘Harmonica Andromedaon‘, we get to experience this journey, and how it is communicated through the album’s songs, and artwork. In due time, it’s music videos as well.

The opening tune is that of the album’s title track in ‘Harmonica Andromeda‘. Harmonica features KSHMR’s classical soundscape and is sees us embedded in a carnival. From here, each song takes us to a new destination. They feature new locations, and cultures, all through the power of music. This is seen beautifully in tracks like ‘Gypsy Waltz‘, as well as ‘Midnight Lion Walk‘.

Furthermore, KSHMR continues on to explore the outer realms of the universe. We see this on tunes like ‘Mystical Beginning‘ & ‘The World We Left Behind‘. It should be noted that the latter of these tracks features vocalist KARRA. This is someone who just so happens to be one of Niles’ long-time and favorite collaborators. When speaking on this tune, KSHMR explained:

“ [this is]…the best song I ever made. It’s a bit Lion King, a bit Porter Robinson and embodies so much of what I love in music.”

After this, we get the tune ‘Around The World’, featuring NOUMENN, which is personally one of, if not my favorite, tracks from the album. I can’t help but feel a heavy Avicii vibe. This is mostly attributed to the vocals, the instrumentation, and the lead melody. To that, I say this album is an automatic success. But I digress, from here on out the album continues on to a few interludes of sorts in ‘Storm’, ‘Peace‘, and ‘Wings‘

Mixed in-between these are ‘Song Of War‘, and ‘I Will Be a Lion’. ‘Song Of War‘ is just that, a song of war. This bass-centric song is more than enough to get even the biggest bass head among us head-banging. Meanwhile, ‘I Will Be a Lion‘ features vocalist Jake Reese, who you may remember from Hardwell’s ‘Mad World‘.

KSHMR finishes out his masterpiece of an album with a loving ode to his own mother titled ‘Paula‘. This is a big one, as it is the first track in which Niles uses his own vocals – for the first time ever.

Lastly, when asked about his feelings on his debut album, KSHMR had the following to say:

“The creation of Harmonica Andromeda made me fall in love with music all over again — there’s a journey in every song. It’s the most creative music I’ve ever made and the most challenging, filled with sharp turns and surprises. I hope the world loves it as much as I do.”

Although I didn’t cover every single track on this new album, it’s for a good reason – to encourage you to give them a listen yourself.

After giving the album a listen, I’d have to agree that it is indeed the most creative music I’ve ever heard from KSHMR, and probably some of the best as well. Having known him for his big room anthems and eclectic blends of all things EDM, ‘Harmonica Andromedaon‘ is a nice change of pace. While you can still hear KSHMR’s characteristic sounds, and techniques, it is amazing to see him use them in a different way.

If you were looking for new music, a KSHMR fan, or just want a reason to give ‘Harmonica Andromedaon‘ a listen, this is it. Give it a listen, and let us know what you think about it. I think you will be pleasantly surprised.

With a total playtime of 46 minutes, this is the perfect album to play to get you vibing while you get ready for work, or through a good workout. With that being said, KSHMR’s debut album is out now on Dharma Worldwide & SPINNIN’ Records.

Be sure to stream ‘Harmonica Andromedaon‘ below. Enjoy!

Be sure to tune into the tune in to official Harmonica Andromeda Album Livestream On March 19th & 20th Here.