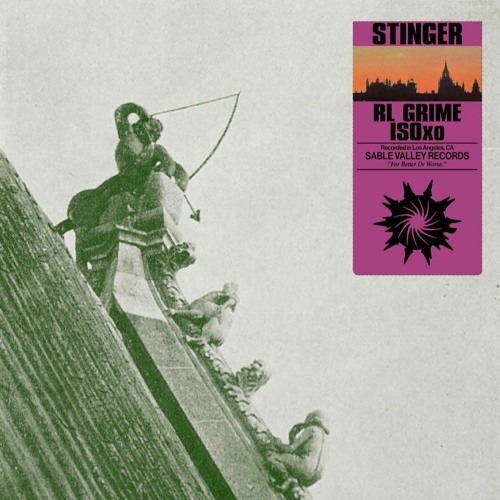 Alright RL Grime, we see you with your latest single featuring ISOxo. They call it ‘Stinger‘, and boy does it sting you. We see its release on Sable Valley and this fiery track could very well be the trap track of the year. We know he’s going to play this at HARD Summer, and we would be insulted if he didn’t.

The monstrous bass track is dirty, dark, haunting, and immaculate. It builds up with a shifty melody and two heavy drops that smear that dirty smirk on your face. Its energy is similar to that of ‘Core’, with a percussive opening that sounds like a drumline. Once that drop hits, you will go ballistic; this is not a drop for the faint of heart. Yes, your bass trap king Henry Steinway is back and he’s ready for festival season. Count on that. He debuted this song on his Halloween IX mix and showcases his signature spooky energy with its release. You will bang your heads so hard that the rails will break. Under the flashing lights, we hope everyone has an awesome time with him at HARD.

ISOxo is a young West Coast producer rising through the ranks, especially after a collab like this. He literally started making music in middle school, which is around 2012. Eight years later, he is working with one of the biggest names in EDM music. His single ‘Radial‘ with Knock2 is the first to appear on Sable Valley, where he made a drop and sample pack, got together with Knock 2, and finished it. Graves played it at HARD Summer 2019 and the rest is history.

He makes the perfect addition to the trap family, where both artists’ production skills perfectly complement each other. This banger just hits so hard, you have to plug in your speakers to really listen to it. Listen to their newest single below.