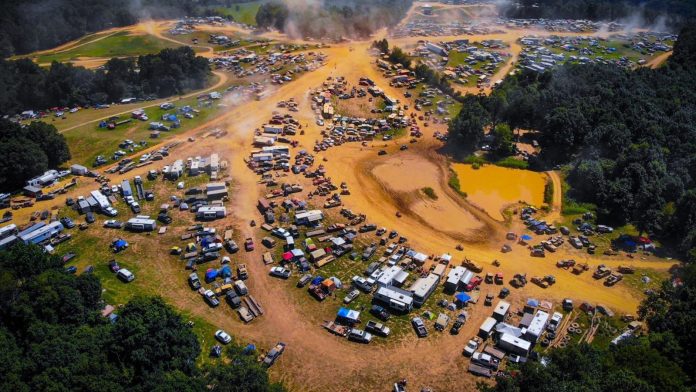 This past weekend, Kentucky hosted a massive country music festival called the ‘Redneck Rave.’ It had a stellar lineup of chaos featuring: one man getting impaled, one woman being strangled to the point of unconsciousness, and one man’s throat being slit. In total, 14 people were arrested and close to 50 were charged with drug and alcohol violations.

Justin Time, a country rapper, organized the event at Blue Holler Offroad Park. It drew a crowd of tens of thousands ready to party. Besides the danger it presented by some people, it actually sounded like a fun time. There was a demolition derby, goldfish racing, and a full-scale football game. In the background somewhere, there was also a concert going on.

The man who slit his friend’s throat has yet to be caught. One could only imagine exactly why you would do that to a friend. The man who got impaled thought it would be smart to ride his recreational vehicle over some logs. The paramedics decided to keep the log in him as they airlifted him to the hospital.

If this intrigues you in any way there is another Redneck Rave scheduled for this October. It should be noted, it doesn’t seem EDM will actually be playing there. But hey, maybe they will hire a DJ and things will actually get even crazier. I can only begin to imagine a dubstep mosh pit featuring these “rednecks.”