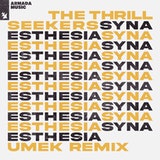 Remember the 1999 classic trance hit ‘Synaesthesia‘ from The Thrillseekers? Now UMEK is trying his hand at remixing this epic trance tune with some hard-hitting underground sounds. We see its release on Armada Music and it’s a great rendition of bringing back the old into the new.

From the beginning, you recognize the soft synths playing the melody. But soon after, a ground-hitting bassline pounds and propels you. It’s that heavy sound you love when you hear great techno. Lightly, the nostalgic melody continues to play in the background and it ascends your ears into trance heaven. It follows with a slightly melancholic but triumphant atmosphere as it moves forward into the next verse. The original floated you to another place and sums up trance perfectly. This one takes you to another level of that space, fighting for your right to rock out. The track is aptly named because the production of either version gives the listener a sense of stimulation throughout multiple body parts.

Hailing from Slovenia, Uroš Umek has been musically active since 1993 as a dance music composer and DJ. He is the owner of several techno record labels including 1605, Consumer Recreation, and Recycled Loops. From organizing small raves to becoming Slovenia’s most wanted and number one music ambassador, he travels continuously to provide his fans with the best in his music. Aly & Fila recently featured his remix on FSOE 708, with appearances also on Solarstone’s Pure Trance Radio 291, Heldeep Radio 367, and Gabriel & Dresden’s Club Quarantine 220.

Enjoy UMEK’s remix below and another one by En-Motion, where their remix truly takes you back to the early days of trance and raving. The nostalgia is so real.