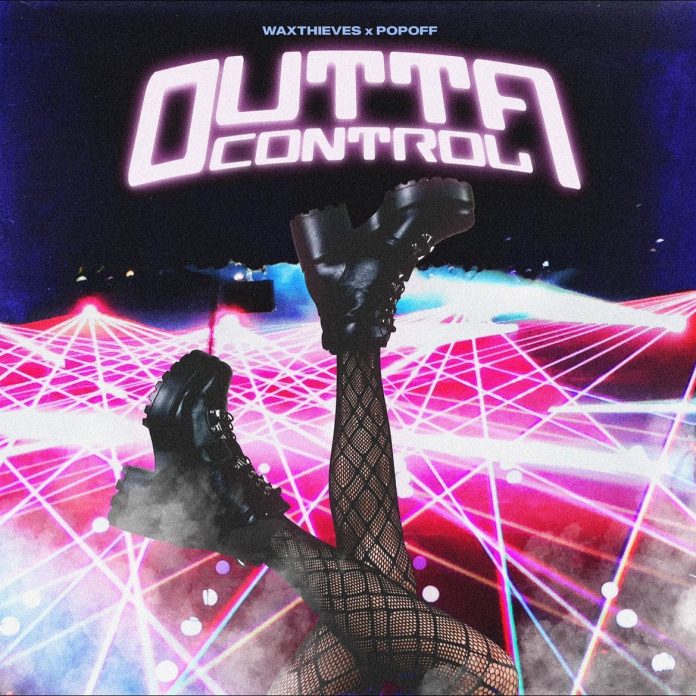 Its always a good day to find new music from rising stars. Today, I bring you just that in the form of a collaboration between Waxthieves & POPOFF. In the past, we’ve written about POPOFF, thanks in part to his collaboration with GIOMANI, titled ‘Just 4 U‘. Today, we are doing it again, only this time it’s with his track alongside Waxthieves called ‘OUTTA CONTROL‘. If you’re a fan of catchy bass-heavy house music, I think you’re going to love this one.

‘OUTTA CONTROL‘ is a fun track, in that it starts relatively quicker than most songs out there, it gets right to the point if you will. Firstly, less than thirty seconds into the tune, we find ourselves at the song’s chorus. It is being led by a bass line that would make anyone get up out of their seat to dance. At about the one-minute mark, we are graced with the sultry vocals of POPOFF, and they sound GREAT.

We get to see both Waxthieves & POPOFF flex their production skills on the tune in the form of the vocal work. I say this, as the tune features some serious vocal pitching that I think would make even DJ Snake jealous. As a whole, the tune works. In addition to this, I’m positive it’s something crowds would lose their minds to on the dance floor.

When asked about how ‘OUTTA CONTROL‘ came together, POPOFF had the following to say:

“…there isn’t much to say other than we did the song in one night, I met Frankie (1/2 of Waxthieves) at a rave a couple weeks before and him & his girls listened to my music, so that one night a a rave he asked me if I wanna sing on one of his tracks, so the following tuesday we got together in his… downtown studio… and did this❤️”

“He [Frankie] had worked on the instrumental before we met, and I just freestyled the melodies and wrote the lyrics that one night, and chopped up my vocals to make the vocal chops. I already had it in my head when I sang it, so chopping it up wss just to make it sound “chopped” instead of sung. haha”

Lastly, when asked about the lyrics, POPOFF states:

“My lyrics are somewhat generic for a party song, thats what I wanted it to sound like so everyone can relate.

You are the one you are by my side,

a ride in the dark you show me the light.

I’m loosing control you are by my side,

cause you are the one,

you are the one.