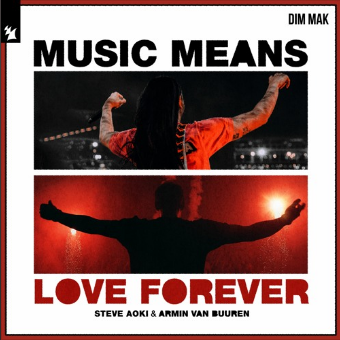 Armin van Buuren drops another massive collab, this time with… Steve Aoki? This is very surprising. Their collab is ‘Music Means Love Forever’, even more surprising, they explore tech and house sounds in this track.

The first thing we notice is the enormous influences of the electro-big room-house belonging to the future rave movement. In addition, he follows the line of styles and elements that we didn’t hear in any Armin van Buuren production just like ‘Anita’, his collaboration with Timmy Trumpet. Its intro is very reminiscent of the ideal productions for festival mainstages made in 2014. That is where Steve Aoki’s particular style, that partying and explosive, takes place.

Right away a robotic voice appears which breathlessly mentions “Music Means Love Forever”. This voice further enhances the futuristic vibe that the song brings from deep within. Later, the build-up that marks the beginning of the drop makes an appearance. With sounds more typical of dark techno than electro, but that greatly keeps the future rave essence sustained. ‘Music Means Love Forever’ is energy and joy packed into a track of fewer than 5 minutes.

Although the drop contains parts that are not part of either Armin van Buuren or Steve Aoki but from the EDM scene of a few years ago. All this combined with a sound more typical of this time which sustains the message found in the title of the song: Music means Love forever, at any time of human existence.

This track is absolutely surprising but in a good way. It shows the ability of both producers to experiment with different styles and adapt to any circumstance that happens in the musical world. ‘Music Means Love Forever’ is worth a listen to get an appreciation of how versatile top artists can be, especially these days.