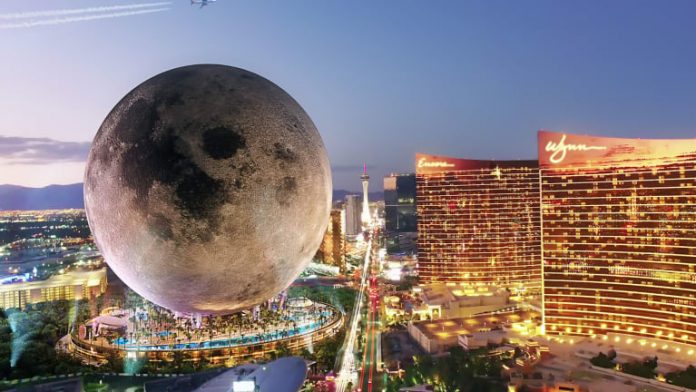 In case you haven’t heard, a new and massive moon-shaped Las Vegas Resort is in the works. It will feature 4,000 hotel rooms, a spa, a casino, and an insane spaced theme nightclub. The NY Post even reported (comically) that staying at the new resort will cost 500x less than a trip to space. They compared this to the $250,000 ticket it would cost to go on Jeff Bezos’s Blue Origin or Richard Branson’s Virgin Galactic flight. The cheapest rooms will cost $500 per night.

The resort, appropriately named Moon, will have entertainment for all including a lunar colony, crater café, and a lagoon. The nightclub will be themed to be the surface of the Moon itself. The club will be positioned directly under a model spaceship. It will have lights and lasers that beam onto the crowd below.

The resort in total will cost $4.9 Billion to complete. The resort will be the largest sphere in the world and the second-tallest building in Las Vegas with a height of 735 feet. The company that designed the future resort plans to create other Moon-themed resorts in Europe, Asia, and the Middle East.

The Las Vegas project currently has no project completion date. Something of this magnitude will take years. We can’t wait to dance on the “moon” when this opens. Who will be the first DJ that plays there?