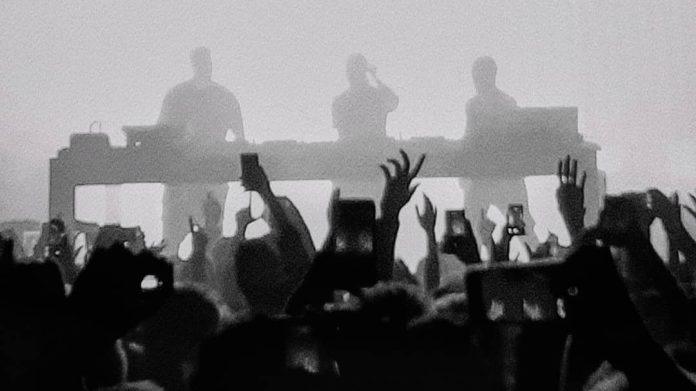 The long awaited Swedish House Mafia arena tour is finally coming to fruition. The news hit today after the trio’s signature black dots and thrice-repeated words popped up in a variety of venues around the world. So far, the following locations have been confirmed:

Billboards have emerged to ignite the spark. In Las Vegas, at the Aria hotel, we see a sign with SHM’s name and logo. While it’s cloudy over there, we can’t help but get excited for this. Where can we find them in Houston? At the Toyota Center, where the Houston Rockets play. In London, the O2 Arena, and in Amsterdam, it’ll be at the Ziggo Dome. More venues are to be announced for suppsedly more locations soon.

Check out the a video clip of another destination here. After the way the 2019 tour ended, many fans were left uncertain about future shows, despire the lifetime passes being given out. But this time, this is real. After their collaboration with The Weeknd and getting special recognition for ‘Don’t You Worry Child’ as Sweden’s Best Dance Music Track, an album tour is highly anticipated. They’ve appeared at the VMAs, released new music, and even partnered with IKEA for a new collection.

The world is ready for SHM to come back. There is so much to be announced, so stay tuned as we do.