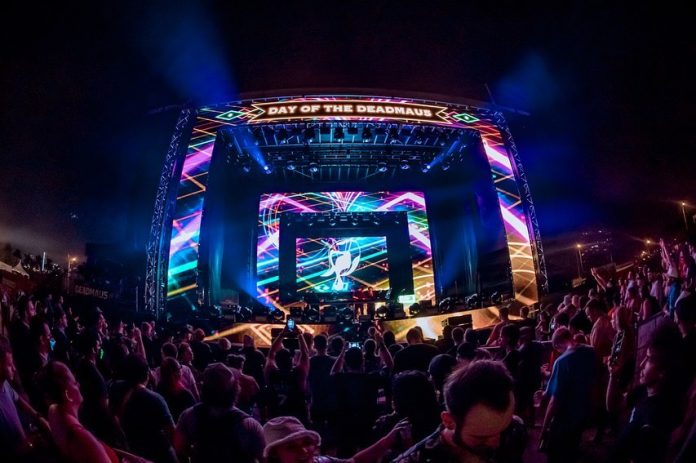 As a reader of EDMTunes you’ve undoubtedly experienced a music festival before, maybe even a camping festival. What less people have experienced is one of these new-fangled destination festivals. Enter Pollen, who has become the go-to name in destination festivals. Generally, these are mini-festivals built around a headliner artist like Tiesto, Kygo, Diplo or Deadmau5 and they are similar to what you might find going on Groove Cruise or Holy Ship. You’ll see multiple sets from the DJs in various different locations spread around a particular area and you’ll more than likely have accommodations as part of your festival package. Having attended festivals for a decade now, including one of those cruise festivals, I decided to try out Pollen’s Day of the Deadmau5 in Miami over Halloween weekend.

Being a Miami local, I didn’t get the full hotel package, but the festivities were still more than enough on their own. However, Pollen had the good taste to select some of Miami’s newest and most buzzworthy hotels for the event. The brand new Moxy and Goodtime Hotel were both options for the event, and you’d surely see plenty of the hoard at either one. Over the entire weekend, there were three (and a half if you count Story on Sunday) venues that Deadmau5 performed at, each providing a different Miami flavor.

Things kicked off on Thursday night at the picturesque Island Gardens. This location, across the street from Joia Beach, features breathtaking views of the bay as well as the Miami skyline while you watch the DJs play. The setup was completely outdoors, which was great until a downpour hit later in the evening. The stage featured a very solid production and the venue was more than big enough for the crowd. You never felt cramped or that food/drinks/restrooms were too far away. The roster featured names from across the Mau5trap label family, like Rinzen and Spencer Brown. To close it out, deadmau5 donned his testpilot techno alias for a high-energy set. Sadly, a freak storm appeared seemingly out of nowhere halfway through his set and suddenly the music stopped. Joel took to the mic to explain that, actually everybody had to leave, like right now. Not even 2 minutes after he said this, the rain started pouring and everybody bolted.

The gang returned to Island Gardens again on Saturday night, but this time the weather cooperated beautifully and deadmau5 performed one of his more traditional sets. He hit on all of his hits, his classics, a few of his personal favorites from Wehbba and Enrico Sangiulano, and even a few IDs.

Friday night saw the entire crew take the show over to Wynwood to explore Miami’s more urban industrial vibe. The new Oasis development was the perfect place for this relatively intimate festival group. It features a large tower bar with several bar/restaurant venues around it and a big stage setup. It’s basically like a permanent festival space and the show went off without a hitch.

Perhaps the coolest part of the weekend was that on Saturday afternoon Joel took the Mau5trap crew to Brickell’s Wharf waterfront bar for an afternoon brunch set. This swaps out the festival concert vibes for a daytime bar environment with boats driving by. A boozy brunch pairs perfectly with some DJ sets from Deadmau5 and the gang.

Technically this was not a part of the Pollen event, but nonetheless, Deadmau5 didn’t let the festivities end on Saturday. He rested up Sunday to perform at South Beach’s Story Nightclub for Halloween night.

All in all, the Pollen destination festival formula is a great time and a fun new way to experience DJ sets in a new locale. Stay on the lookout for more Pollen events in the near future!