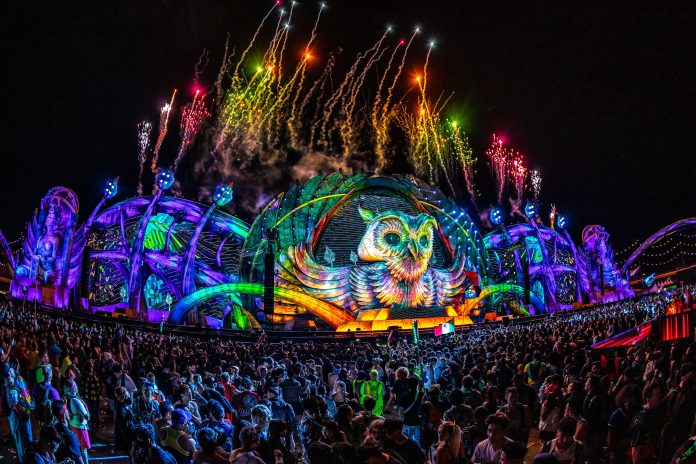 EDC Las Vegas made its return once again after a long hard two years this past weekend. For three days, from October 22-24, headliners gathered once again to dance under the beloved electric sky. In celebration of its 25th anniversary, Insomniac went bigger than ever for this year’s edition. Here’s everything you need to know about the EDC 2021 return.

This year, EDC expanded its footprint by using the entire Las Vegas Motor Speedway in its entirety! And boy, did Insomniac take full advantage.

Besides more stage additions, such as nomadsLAND and Forest House, the number of art installations surrounding the area was immense. To say that the festival was an Instagram hot spot doesn’t even describe it. Headliners everywhere took the time to take pictures in front of rave-inspired art as they walked through the massive festival grounds.

Besides art installations, there were more rides and food vendors added to the festival map. If you needed to take some time to nourish your hunger or have some fun outside of the DJ performances, there were many options to choose from. Some would even say that there was so much to do outside the music sets that there was just not enough time to do every single thing. However, I say this in a positive way, because nothing is better than having too many options than having none at all.

Now, of course, a festival of this size does come with some disadvantages. For those who didn’t attend this year’s event, make sure to bring some good dancing shoes to next year’s EDC Las Vegas. Expect to sprint from each stage, as most of them are so far apart you’re likely to miss at least 20 minutes of your favorite DJ set. If running isn’t for you, then the best option would be to gather the courage to leave a little early during each set to make it on time for the next one. Either way, by the morning, you are going to feel the amount of walking and dancing done after each night. So expect some soreness!

Surely, this year’s lineup needs no introduction. With so many of the most popular DJs being set to perform at the event, there was no way you could call this a bad lineup.

Insomniac is known for going above and beyond with its EDC Las Vegas lineup. 2021 was no exception. Headliners could see artists from all over the EDM spectrum, from trance, dubstep, house, techno, experimental, and more.

Top-tier artists such as Kaskade, Zedd, Kygo, and Seven Lions took over the major stages and performed fan-favorite tracks while also teasing some unreleased songs. Headliners also had the chance to see the first-ever SLANDER B2B Said The Sky set, along with other iconic B2B performances. Deadmau5 performed not only as his electronica project but also as his Testpilot techno alias. Not only that, but there were also many special guests who made special appearances during the event, such as Illenium, Lil Nas, Kid Laroi, and more.

To say this lineup was great is surely an understatement. With 100+ DJs and so much diversity, there was no way you didn’t have at least one set you were excited for.

Each artist brought their own unique sound to the table. However, you could certainly notice a trend.

For many, some of the performances were a regurgitation of the same sets they’ve performed before. Others stuck to playing the same bangers that were popular pre-pandemic. Usually, this happened with some of the more popular artists, like DJ Snake.

However, I shouldn’t fail to mention some of the mind-blowing performances that took place at the event. Headliners had the chance to see Kaskade play an underground-style techno set which is not usual for the renowned artist. Psytrance trio Abraxis also took over the neonGARDEN stage, making their first official debut performing at EDC.

With every festival comes a fair share of great sets and not-so-great ones. However, with a festival like EDC Las Vegas, any performance can be considered memorable.

Insomniac went all out this EDC Las Vegas. New stages were added across the entire festival map, with each filled with powerful LED lights and screens to showcase visuals.

Most of the big stages were set up with their own pyrotechnics, consisting of fireworks, fire, and confetti. Most of the jaw-drops, however, took place at kineticFIELD. Headliners saw more advancements at this stage, including a series of drone shows that took place in the sky.

Sound production was done very well, as the music volume was at a comfortable level where headliners didn’t feel like their ears were coming off. However, stages like quantumVALLEY and neonGARDEN saw some noise bleed due to their close proximity to each other. This may have to do with the fact that circuitGROUNDS was so big that there was no way these stages could be farther from each other.

EDC Las Vegas did see a series of complications at the festival, especially in regards to camping. Headliners did not only go through a temporary water break, but their tents were without air conditioners after being promised to have them. There were even reports of staff being unhelpful and a massive trash build-up in the campgrounds.

Shuttles were better in comparison to previous years, as many people reported getting to and from the festival pretty quickly. However, I did have the misfortune of going on one of the farther, highly-populated shuttle stops. In my experience, the lines and wait time were pretty long. It would be great to see more shuttles added to some of the farther shuttle locations, like the Tropicana. Although much of the other stops were secured, the farther stops could use some more help.

Of course, with a festival of this size, it’s common for mishaps like these to occur. Insomniac is known for not taking these complications lightly, so this may just be another learning lesson for future festivals. Surely, they will do a better job at preventing these kinds of issues in the future.

Insomniac went all out to put together a big 25th-anniversary celebration. With the addition of the drone show, new stages, and art installations, headliners can see the festival powerhouse went big for the occasion

Despite the complications, headliners saw at the event, it was still an epic show. We can’t wait to see what more is in store for EDC Las Vegas 2022.