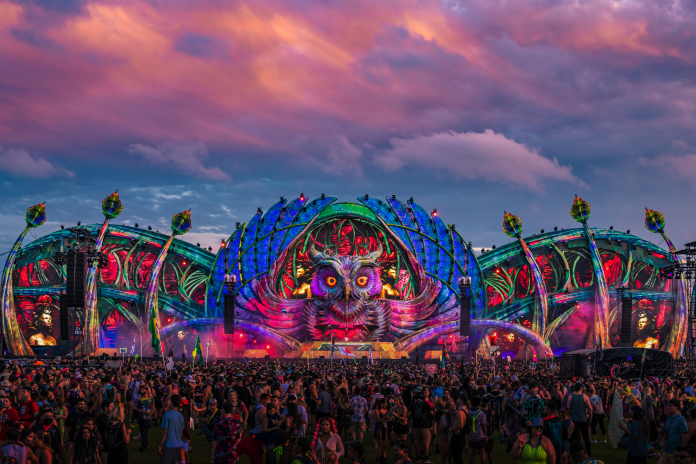 EDC Orlando made its official return to the sunshine state on November 12th-14th, just two weeks after its Las Vegas edition took place. Returning to the Tinker Field Stadium after two years, bigger than ever before, thousands of fans gathered together under the electric sky to celebrate the power of dance music.

The 2021 edition marked 10 years since EDC first made its landfall in Florida. Not only that, but ravers also celebrated a great 25 years since the festival’s origin. Therefore, as many fans can expect from Insomniac, this year’s EDC Orlando was full of unexpected surprises and many memorable moments.

Fans that took part in the Las Vegas edition saw the return of Insomniac’s latest EDC stage. kineticFIELD’s iconic yet massive owl made landfall to oversee headliners dance the night away. The circuitGROUNDs also made a comeback, although much smaller than before. However, the bass was still just as powerful at this heavy-hitting stage.

Those who chose to venture outside of the two main stages had the chance to visit neonGARDEN, the realm for all things techno. Similar to its counterpart in Las Vegas, fans were under a huge tent, but this time with a huge diamond hanging at the center of the stage platform. Going away from the techno genre, stereoBLOOM also made an appearance. With its steel bars and large circular screen, headliners witnessed some epic deep and big room house sets here.

For those who were interested in listening to new music by EDMs rising artists, Corona Electric Beach and Rynobus were the places to be. Each one held a large line of talented music makers trying to solidify their mark in all things dance.

Although each stage came with their own unique personality, they had many things in commons. Production, lights, and visuals were of high quality, although the bigger stages also saw some epic pyrotechnics. The sound was at just the perfect level, with the bass hitting heavy and the melodies entrancing each raver at the event.

Headliners also saw the return of the newly introduced drone show, which first took place at EDC Las Vegas. Words such as “EDC 25th Year” and images lit up the night sky.

Insomniac carefully curated this hard-hitting lineup, with many inspired by this year’s EDC Las Vegas performances. Many artists such as Tchami, Kygo, Dabin, Seven Lions, Excision, and more returned to EDC just after performing for the Las Vegas edition. However, joining the ranks were some of dance music’s local and rising artists, such as D3V and Luccio. Headliners also saw some unique B2B sets, such as NGHTMRE B2B SVDDEN DEATH and a surprise John Summit B3B Green Velvet B3B Dom Dolla. To say this lineup was quite an impressive lineup is surely an understatement.

Apart from dance, EDC is known for catering to fans, especially when it comes to entertainment. For those who were not only there for the music, there was a series of rides all over the festival grounds, including Ferris wheels and swinging chairs.

Many art Installations that made an appearance at EDCLV returned for the Orlando edition, including the now renowned woman figurehead, Anima, who blows a kiss to all who pass her. A downsized Pixel Forest also made a return, with the recently introduced Coinbase, which showcases NFTs. Among others, headliners had a variety of opportunities to take a picture with some exquisite and carefully-curated artwork and structures.

Food and drink options were in an abundance at the event. Bars and vendors were situated all along Rainbow Road, Daisy Lane, and beside every stage. Headliners had the choice to choose common food options, such as chicken tenders, fries, and pizza, as well as cultural foods not always found at music festivals. Festival-goers even had the chance to try the iconic Island Noodles, which many ravers have stated to be one of the best meals at any event. However, to pair with these delicious food items, EDC Orlando delivered a long menu of alcoholic beverages. Some items off the menu included the now renowned Beatbox, which sold-out most days of the festival, tequila seltzers, and cocktails.

Those in VIP had much more to do when it comes to entertainment. Other than exclusive stage viewings of the show, pass holders were welcomed to take part in a beauty bar, were given free goodies, such as jewelry, tea, and food, and could leave small letters in mailboxes to other ravers passing through. In addition, these areas held local food trucks; headliners could try some of the best dishes on the east coast, such as special grilled cheese and Mexican tacos.

There were some issues at this festival, although most were due to complications outside of Insomniac’s control. Headliners were surprised with rainfall on Saturday, which caused the land to become wet and muddy. Some of the mud didn’t dry out on time, staying until the last day of the event.

Also, headliners witnessed a few sets cut off short for an unknown reason, one of them being Seven Lions. Many speculate it is due to the ceremonial shows and the drone showcase.

Apart from these issues, EDC still made a huge imprint on the city of Orlando. With ravers gathered from all over the globe, the event was nothing but good vibes and much fun.

EDC Orlando will return on November 11th-13th, 2022. Passes have already gone on sale for next year’s edition. Make sure to purchase your ticket for the chance to dance under the electric sky in the sunshine state.