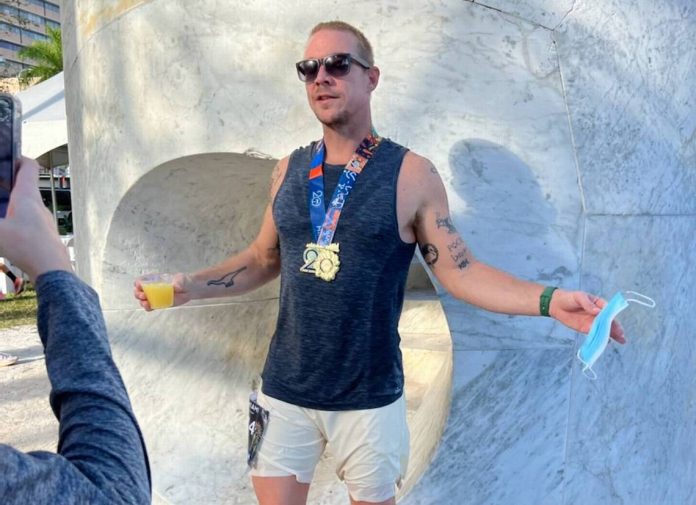 Versatile producer Diplo has once again proved that his talents run beyond the world of music. The Grammy-winning American DJ shared an Instagram reel on Sunday about proving his friend wrong who doubted his ability to run the Life Time Miami Half Marathon with no training. And celebrating after finishing the 13.1-mile course.

“My friend bet me again that I couldn’t run the Miami half marathon with no training..” Diplo wrote at the start of the reel.

The video clips show Diplo doing a happy dance and then partying at the front of a crowd at a stage.

“And had to let everyone know that I run marathons now..” he finished. The reel ends with Diplo at a day club fist bumping two guys, including one that appeared to be working security.

The song playing in the background was “Push It” by the hip hop group Salt-N-Peppa. His caption for the reel was, “I’m sleeping in my medal tonight.”

Diplo, whose real name is Thomas Pentz, 43, finished the half marathon in 1:50:11, which he pointed out was shorter than his two-hour set at a Miami nightclub.

“So E11EVEN’s probably harder,” he told the Miami Herald.

It was Diplo’s first half marathon and he now plans on running the full 26.2-mile Los Angeles Marathon in March, according to the newspaper. But not before heading to Club Space for his set on Sunday night.

It’s not the first time that Diplo has taken up a physical challenge from a friend. On January 31, the producer posted an Instagram reel about his friend betting him he couldn’t complete in a Spartan race. Diplo noted that little did the friend know, he was named the most improved player on his junior varsity basketball team.

Among the humorous clips of Diplo warming up is one of him holding on to a rail like a headbanger at a festival. Another competitor also helps him stretch a leg. The reel shows Diplo nailing the spear throw on the first try. He tries and fails twice on the rope climb, then spits into his hands. He writes, “3rd time’s the charm,” as he makes his way up and hits the bell at the top.

Diplo was so proud of his accomplishment that he had his assistant add fire and eagle sound effects at the end of the reel.

“All this for dinner at any restaurant I choose,” Diplo wrote as the caption of the reel with “You’re The Best” by Joe Esposito as background music.

Diplo has been on the other end of marathons in the past. He was the headliner for the finishing line party of the Nike Choose Go 5K marathon in Manhattan in April 2018.