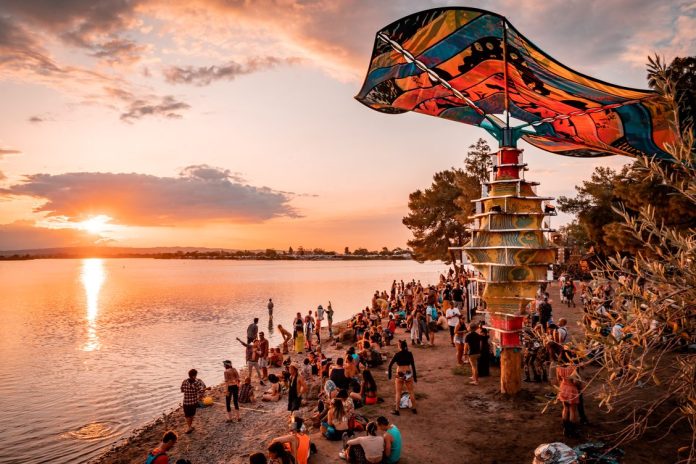 Lightning in a Bottle is more than a music festival. The Buena Vista Lake event hosts a mix of speakers, interactive art installations, meditation and yoga classes. Festival goers camp on site. And many consider it to be a best kept secret in Southern California. The producing organization, Do LaB, seeks to promote sustainability, social cohesion, and creative expression. In addition to putting on LIB, Do LaB creates art installations featured at Coachella.

In Phase One, they announced heavy hitters like Glass Animals, Griz, Big Wild, Clozee, and Four Tet for the main stage. Recently LIB has announced their phase two line up and even more artists have been added to the docket. And the festival has also revealed their periphery stage concepts.

The Stacks will be where the bass music thrives. Like the name suggests, you will find ‘stacks’ of woofers and subwoofers here to ensure that the sound vibrations make it all the way to your marrow bones. The stage will feature names like Mimosa, HoneyBee, Pressha, and Beat Kitty.

The Junkyard will be the home of house and techno. It features recycled junk throughout. For those who burn, this stage will feature the ‘Junk in the Trunk’ art car, which has been at Burning Man in the past. The art car will be mobile and appear at many places throughout the festival. The Junkyard has some noted names including G-Dubbs, Mr. Bootsause, Patricio, Rachel Torro, and Henry Pope.

The Grand Artique will host the Wild West village of Frontierville, and play host to some of the more bluegrass-step groups that play on the twangier side of Electronic Dance Music. The stage will feature a classic saloon and general store. Events like psychedelic hoedowns, renegade operas, and a grand artique talent show will unfold over the course of the festival. Dirtwire, Moontricks, The Brothers Comatose, and Tommy Guerrero are on the roster.

With the reveal of this next phase. Lightning in a Bottle is priming itself for a successful eclectic event that has a little something for everyone. May 25-30th in this region of Southern California typically has a temperature range of 58-84 degrees, with the daily mean right around 71 degrees. Nestled on to the picturesque Buena Vista Lake, festival goers can hop during the daylight hours to cool off after a sweaty dance session. EDMTunes will keep you updated with future news surrounding the festival.