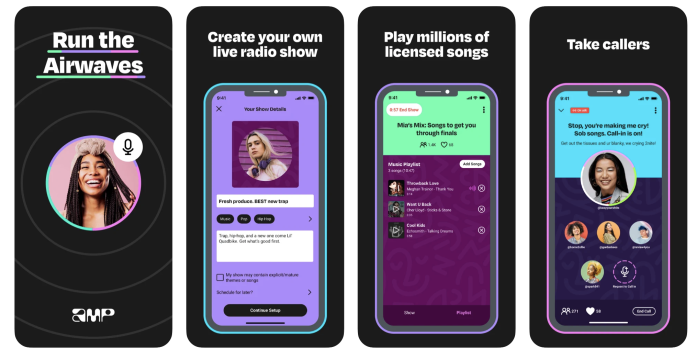 Amazon just launched a new mobile app called Amp. It lets you create and host live radio shows as if you’re the host DJ. You can take callers and play tracks from tens of millions of cataloged licensed songs. They range from classic to today’s mainstream music. Right now, the app is currently available in a US beta version. Check out their promo video here.

Under development, it was Project Mic and rivaled the Clubhouse app which focused more on live social interactions. That is, they focused on live podcasts and talk rather than music. So, Amp is here to show that users can play as a DJ, stream, and chat about their music and artists. But they can also use the app to talk about anything else while curating playlists for everyone to listen to. In essence, your very own radio talk show.

“Radio has always been about music and culture. But imagine if you were inventing the medium for the first time today. You’d combine what people love about radio—spontaneous talk, new music discovery, diverse personalities, and broad programming. [All] that’s made possible by today’s technology. You’d make it so anybody with a phone, a voice, and a love for music could make their own show. And that’s exactly what we’re doing. Amp makes it possible for you to grab the mic and run the airwaves. We are creating a new version of radio that will have an infinite dial of shows.”

In addition, creators can also pre-plan their shows, alert listeners about upcoming shows, and control who speaks when taking live callers. They just sign into their Amazon account to use Amp, with a 24/7 moderation team on stand-by to review reports. And you do not need to pay the labels to play their music. Choose music from the vast catalogs of Universal Music Group, Sony Music Entertainment, Warner Music Group, Beggars Group, Believe, CD Baby, and more.

Run the airwaves and relive your childhood dreams with this app now. Decide on a show title, create a playlist, and stream your own radio show. Currently, Amazon stated it is available with an access code, but will be dropping codes regularly on socials. Download it from the US iOs App store and sign up for the waitlist.