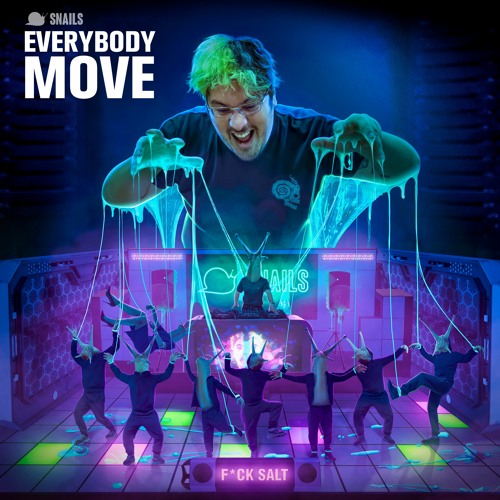 In succession to the release of critically acclaimed multi-part “Slime Time”, bass superstar Snails debuts his EP series finale with “Everybody Move.” Slime Time part one marked the producer’s return to his original Vomitstep poise and continues its effort to feature guttural bass and grotesque sound design in part three. With its single out now, Snails and the Slugz music crew offer a flavoring of mind-bending dubstep that will be a treat for bass enthusiasts everywhere.

“Everybody Move is a song that goes way back to the OG SNAILS sound growl. It’s been such fun playing with old basslines of mine that I owed my vomit squad a song like that. I love the movement of the bass and the sub and it’s been something that I feel gives such a unique grooviness to the style of music. The hybrid genre of the track blending heavy hip-hop drums with horn melody added on top of that weird “snaily” synthesizer really brought back SNAILS original style from when I started.” – SNAILS

In true Snails fashion, “Everybody Move” evokes euphoria at the peak of the rave. The dubstep maven has been entirely successful in returning to his roots and has amassed over 1,098,695 streams on Slime Time Pt. 1 and over 1,317,489 streams on Slime Time Pt. 2. In his tenth year, the Vomitstep proprietor invites his audience to celebrate another phenomenal way of expressing his musical style.