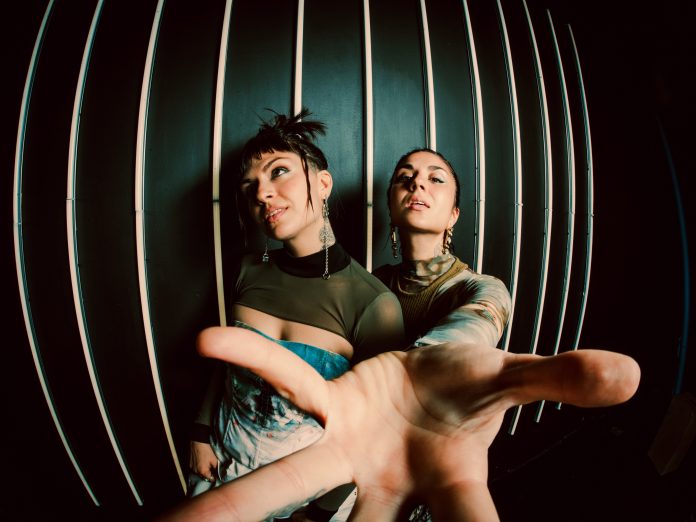 In the span of 11 years, power duo Krewella continues to make waves in the dance music scene, solidifying their place as dominant figures within the electronic genre. After releasing their most recent album, The Body Never Lies, a 10-track compilation filled with some of their most in-depth and personal works, the girls are ready to hit the road once again. The duo has plans to travel all over North America to showcase music off their latest album, while also commemorating some of their most known tracks that fans are known to adore and love.

Before they were set to pack-up and travel to the U.S., Krewella had the opportunity to perform at Ultra Music Festival, one of the most renowned music festivals in the country. However, this wasn’t their first rodeo taking on the Miami event, as they have performed at the iconic music showcase several times before.

Just moments before the female DJ group was set to take on the Ultra Worldwide stage, Jahan and Yasmine spoke with EDMTunes about their anticipation for their performance and took a look back on their music career. They also shared what more is in store for the unstoppable dynamic duo and their plans moving forward as they continue to take the world by storm.

“Thank you so much for taking the time out of your busy schedule to speak with me. Ultra is finally here after a whole pandemic! I know you guys have performed here a few times before, like in 2013 and 2015. Now you guys are performing in a bit. Can you tell me about how you guys are feeling before your performance?”

Yasmine: “Oh, I’m a little (shakes) every time I think about how soon the set is. I get this shock through my body of like nerves, but it’s a really good feeling. This is our first festival since the pandemic. It’s our first one back. And I feel like the energy around us is really good and we’re really excited. And this is the last day. So hopefully people are just gonna like expend everything they have left.”

“And you guys have performed here a few times before. You know, Ultra is really ‘iconic’ in this scene. As performers, what in your experience makes it so incredible?”

Jahan: “Oh gosh. It’s everything. The location being in Miami, the vibe of the fans. The production, the stages, the stage design, the artistic design is incredible. I also think it’s a huge brand now. There’s like an identity attached to it. And I think as people who are frequent visitors throughout the years, they want to continue repeating that same experience. Because maybe it’s our way of like clinging onto our youth or not even clinging onto it, but maintaining it by coming back every year or every few years. And just revisiting a point in time. In a way, it transports me to a time in dance music that was just magical for everyone. So I think everyone here is feeling that nostalgia. It’s like a collective thing that artists and fans are feeling.”

“You literally said the perfect word, nostalgia. Even for me, I came here with my sister and said ‘this is so nostalgic.’ I’ve been doing this since 2016. It’s always so fun.”

You guys recently released your album, The Body Never Lies. Tell me a little bit about it. How was it like creating it? What inspired you to make it?

Yasmine: “We had a lot of time during the pandemic, like everyone else in the music industry. We felt like we needed to take some time away. So we did take a good chunk of the pandemic not creating music. And I built a home studio. So slowly, over time in the pandemic, we started to work on music again.

“We never left the neighborhood because we live like down the street from each other. And we were just going back and forth between the houses we were working on new music and slowly we started to realize we were having all these songs in the same world, in the same vein, and I really wanted to make an album. So I think we just kept working on it. We were writing songs and suddenly we were looking at like 10 tracks and it fell together with purpose. It accidentally fell together on purpose and became an album. It was a really fun process. It’s probably the most fun I’ve had making an album. It’s been the most personal album to us we’ve ever made. It was a great experience. I’m excited to do it again, at some point, making new music again once we finish this tour we’re about to go on.”

You guys are about to go on tour. Can you talk a little bit about what fans can expect from that tour besides the album?

Yasmine: We’ll definitely be performing from the album. Jahan and I have been prepping for the set and we have so much music at this point over our 11 year career. And it’s almost hard to fit all of it. So we’re struggling to figure out what songs we have to take out. We literally don’t have time to play everything. So it’s a little bit hard, but it’s a good problem. So this will be the most Krewella music people have ever heard in a live set from us ever of all time. But there’s gonna be edits, remixes, new versions of songs. We’re getting really creative with it, really excited to bring it.

You guys are experimenting. That’s amazing! Kind of pushing your boundaries. You talked a little bit about your time, like how you guys have been doing this for over 11 years. I’ve been following you guys since the start. So I’ve seen kind of how you guys have evolved as a group since the beginning. But, I want to ask you, how have YOU seen Krewella evolve throughout the years?

Yasmine: “The one word that comes to my mind is confidence, which is weird because sometimes I don’t feel confident in myself, but when Jahan and I come together to create like these two halves of a whole, I feel like I have a lot of faith and confidence in us and that’s something I think we had to build over time… we’ve built up what we have, the relationship with the fans, the amount of touring we’ve done over the last decade, the amount of music we’ve created, the songs we’ve written, produced, just the entire experience as a whole. I think it has put us in this place where we’re like, okay, I guess we know what we’re doing. We’re still figuring out certain things, obviously, but it feels good at this point in our career that we’re just creating more from the heart than we ever have and it’s just flowing out of us and it’s more enjoyable than it’s ever been.”

I love to hear it. So you guys are not only female Djs but sisters. You guys have such a great relationship, and you can see you have great dynamic. Now, I have a sister and I know, as siblings, we tend to get into fights or disagreements. I’m sure when you guys are working together on music projects that’s bound to happen. So how do you guys pass through these disagreements. How do you come to a compromise? How do you meet in the middle?

Jahan: “That’s such a good question. I think we have to remind ourselves in a heated moment that we tend to both say things where we want to respect the other person’s experience and remember that experience in your mind is your reality and someone else has experienced it with a completely different perception of the situation. It’s, of course, been a struggle, but we both over the years learned to navigate those conversations and it’s always coming back to love and respect. So if we feel something getting to a point, or even if it’s about our career, we remind ourselves, ‘Hey, our relationship and our love and respect is more important than arguing about how the flow of a song should be or like how things should be in the studio.”

“I know you guys have achieved so much in your career and I applaud you guys for that, especially as female DJs in this scene. But, what are your goals for the future?”

Jahan: “I’m thinking more so internal goals. So maintaining a sense of trust in myself to navigate my emotions because we can’t really always control what happens externally and like the chaos of it all. For example, we have rehearsals this coming week and preparing my voice for all the live vocal shows is overwhelming. But I trust that I can manage my emotions in those moments. It feels more like an internal goal. But, I think if I’m good from that place, then I’m like down for whatever happens externally.

Yasmine: “We’ve never been able to properly make music on the road. So I have more of a technical goal. I’m really excited to get a mobile rig going because I’m more inspired now than ever. Like, if we had a crazy show where we’re just feeling something, even if it’s 2:00 AM, and we have lyric ideas or I’m like ‘let me try some percussions.’ I’m just really excited to have the option to be able to do that. Cause it’s something that we haven’t been able to do ever in our whole career. I’m gonna make sure that we can have a mobile rig. So if we want it, it’s there.”