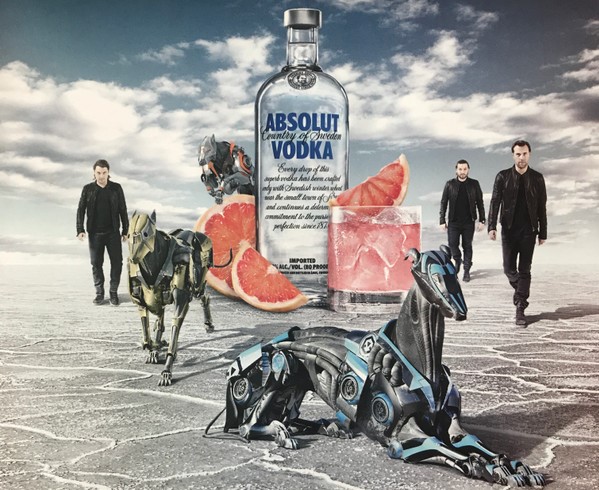 Coachella headliners Swedish House Mafia have struck a collaboration outside of music for the major music festival in the California desert. The legendary trio are teaming up with Sweden-based Absolut Vodka to celebrate its 10th year of being the official vodka of Coachella. To toast to the occasion, they’re launching a themed cocktail – and a livestream experience in the metaverse.

First off, drinks. The new collaborative cocktail is called Paradise (Again) Paloma, an obvious play on Swedish House Mafia’s album Paradise Again, which drops on Friday, April 15. The official Coachella 2022 cocktail starts with Absolut Grapefruit vodka mixed with fresh-squeezed lime juice. It’s splashed with ruby red grapefruit juice and a hint of soda water. And topped off with Swedish Fish gummies for what could not be a more appropriate garnish.

Now, for the livestream. Branded Absolut.Land, it will allow users to experience Coachella within the metaverse. It will offer stages, Absolut digital collectibles and even real-life tickets to Coachella. Paradise Again will be the musical backdrop in the metaverse, through a custom jukebox. Axwell, Steve Angello and Sebastian Ingrosso have already expressed their excitement about the collab.

“We wanted to mix with our fans in a way that’s really innovative and different,”

“And what’s bigger than the metaverse, when we hit the headline stage at the festival on Friday, you can also find us in Absolut.Land to listen and dance to our newly dropped Paradise Again album over the Swedish Paloma cocktail we created with Absolut.”

Absolut.Land launches on April 15, the first day of weekend one of Coachella, here. Swedish House Mafia are headlining Sunday of the first and second weekend of the festival with The Weeknd, whom they collaborated with for the track “Moth To A Flame” on the new album. Swedish House Mafia x The Weeknd replaced Kanye West, who dropped out of his headline slot earlier this month.

For a taste of the Paradise (Again) Paloma cocktail, order an at-home cocktail making kit here. Five cocktail kits will even contain tickets to Coachella 2023.

It’s not the first time Swedish House Mafia have partnered with Absolut. The trio originally wrote its track “Greyhound” for an Absolut commercial in the US in 2012, around the time of their One Last Tour.