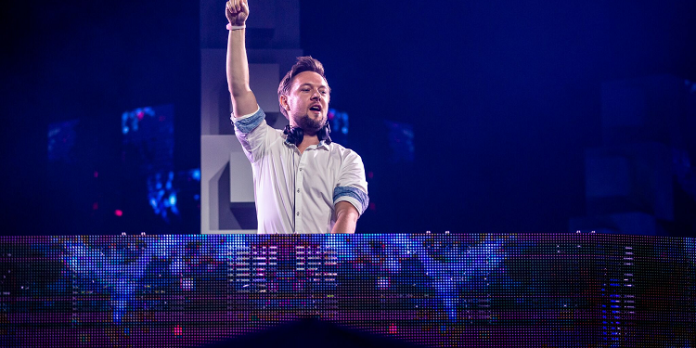 Gaming Music icon TheFatRat, popularly known for songs like “Unity,” “Monody (feat. Laura Brehm),” and “Fly Away (feat. Anjulie),” which have over 800 million streams, has conquered the industry in a very unique way – by going independent, letting content creators use his music freely, and earning a massive legion of online followers in the process.

Known for having his music sync-to-screen for many widely popular video games such as Dota 2 and Rocket League, German producer TheFatRat is the flagship musician for video games, tech and gaming culture. He’s the go-to artist for Esports brands like ESL and Dreamhack, and his sound, which Billboard Magazine has coined as “wildly energetic and genre-bending electro,” has earned him a massive legion of highly interactive online fans, over 2.2 billion streams, and over 6 million YouTube subscribers. We sat down with him to discuss his path to becoming a leader in the Gaming Music community and his debut 10-track album, PARALLAX.

Let’s start at the beginning. How did you first get into music in general?

TheFatRat: I have been making music for as long as I can think. One of my first memories is how I was sitting on my mums lap in front of the piano being two years old. My mum was playing and I was hitting random keys. Of course it sounded awful at first, but after a while the keys I was hitting were fitting better and better to what my mum was playing. So I basically learned music like a language growing up.

Now let’s start on the journey from starting as a producer to becoming one of the pioneers and leaders of Gaming Music. Were you into gaming as a child? What is your favorite gaming soundtrack of all time?

TheFatRat: Hell yeah, I was a gamer as a child. Gaming was my world. Probably one of the reasons I was so bad a school though. I always loved the Elder Scrolls soundtrack from Jeremy Soule. I’m absolutely convinced that a soundtrack can help make or break a game and in the Elder Scrolls, the music is fundamental to set the tone and the vibe.

Why do you think Gamers and the Gaming Music industry took to your music so quickly? Were there any steps or strategies you took to facilitate that?

TheFatRat: See, I would love to tell you my super clever business strategy and how I had it all figured out. But there was no such thing. Instead I was simply making the music that I loved. I had been a professional music producer for ten years already, producing for all kinds of artists and companies before I started TheFatRat. And for me that meant that I had to make a lot of music that I personally didn’t like, just to make a living. But at some point when I could afford it, I made the decision that from now on I would only create music that was 100% me. That’s when my music and and my career completely blew up. Especially in the gaming space, simply because it was where I was coming from as a person. But I didn’t have any promotion behind it, didn’t even have an Instagram account and only posted on Facebook every few weeks. So if you will, my strategy was to make the very best music that I could make.

How have you used YouTube as a resource to foster growth within your community?

TheFatRat: What really helped me on YouTube was that I made my songs free to use for everybody. I didn’t even do it as a strategy. More because I simply enjoyed being able to share my music after a decade of copyright restrictions being imposed on my creations by record companies. But it certainly was a good decision. There are millions and millions of videos using my music, lot’s of them with millions of views which of course was a crucial element to my success.

How do you think the metaverse is changing the gaming and music worlds?

TheFatRat: The big vision here is that at some point digital property can be used throughout different games and virtual environments. So let’s say you buy a TheFatRat hoodie, you also get that hoodie as a token on a blockchain which is then connected to all sorts of games, where your avatar can wear that hoodie.

What would you say to young men and women who are passionate about both Gaming and Music and would like to follow a similar path as yours?

TheFatRat: Being passionate is the most important part about it. It’s so important to make music for the right reason. If you wanna make a quick buck or your goal is to become rich and famous you’re gonna have a really tough time. Because then, making music is only a means to an end. Each time a song doesn’t become a success, it will feel like a failure which will ultimately frustrate you. But if you make music because you love making music and video games are a big inspiration for you, you’ll keep making music no matter if it’s successful or not. And if you do that, success is inevitable.

Now let’s talk about your debut album, PARALLAX. Now that it’s been out for about 6 months can you share any takeaways from it? Perhaps any songs that performed surprisingly well or any major highlights that the album or a specific song has hit since it’s release that you’re proud of?

TheFatRat: PARALLAX was released on my own record label The Arcadium which meant in this case that there was no one involved in the release that had any experience with releasing an album. So it was a steep learning curve for everybody. The biggest takeaway was that next time we’d have the entire album plus all artworks 100% finished before we set a release date. Because when it’s just 90% finished and you run into some unforeseen issues and the release date is approaching things can become really challenging. For example I had a song that I considered the first single. However when I wanted to finalize it, I couldn’t get it to a point where I was really satisfied which meant I had to swap out the first single under time pressure. But in the end it all worked out fine and it was great to experience how much space an album gives you to tell a story. We released one song every week for ten weeks, each with its own artwork. Together the artworks and the songs told a story and it was satisfying to see the fans getting into that.

What was your inspiration behind PARALLAX as a concept and as the title of the album?

TheFatRat: The parallax effect basically states that what you see changes depending on your point of view. Applied on a metaphorical level it means that when you’re trying to understand something you have to look at it from many different perspectives. I think a lot of problems and conflicts arise because we forget that. This topic can be found throughout the album. For example the first song “Hiding In The Blue” is about our comfort zone and how good it feels to stay there but also how bad it feels at the same time. Also the overall story and the artworks were about how much your perception can change with your perspective.

What can we look forward to coming from you in the future?

TheFatRat: More music. That’s what I’m completely focused on at the moment. I also do have some ideas how creative people like me could be better protected against different sorts of harm like false copyright claims and want to work on that at some point. But right now I prefer to stay in the studio and create new songs. I’m planning a collaboration with an amazing K-Pop group at the moment and I’ve been working on that song a lot but it’s too early to give away any details at this point.