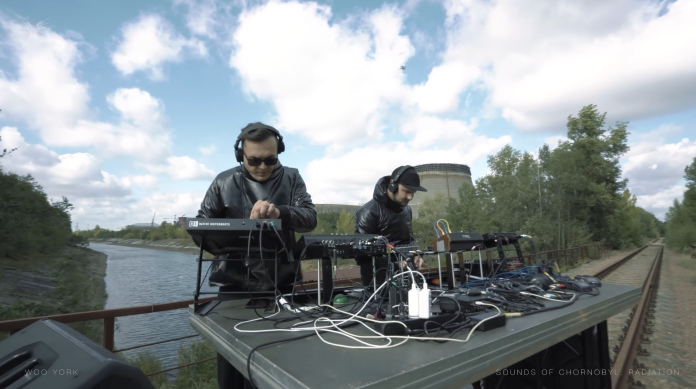 Techno Duo Woo York performed a live set at Chernobyl Exclusion Zone. They dedicated the show to those who helped stop the disaster from becoming any worse in 1986. It was also in support to stop Russia’s aggression towards Ukraine for the last two months. The performance was apart of the Sounds of Chernobyl project.

Taking place on April 28th, the duo performed for an hour to insane visuals that paired with the music beautifully. There was also loads of drone footage of Chernobyl itself. Woo York stood tall on an abandoned railway to support their fellow Ukrainians in never giving up. Hopefully, this hour gave the nation a moment to dance in all the chaos around them. Make sure to watch the performance below.

The press release from the show stated:

Woo York had this to say about everything:

“In these devastating times, we are missing a lot of things we used to take for granted. Looking back to the pre-war days, how happy we were spending time with our families and friends, having fun, playing music, building some plans for the future, and basically enjoying life under a peaceful sky. Little did we know back then, but one day our lives will become normal again. Until then, we will try our best to support our motherland Ukraine – the place of tragedy and rebirth, heroism and reflection, where the lessons of the past must be learned for the sake of our future”

You can donate to help Chernobyl here. There are various ways to donate to Ukraine and here are some options.