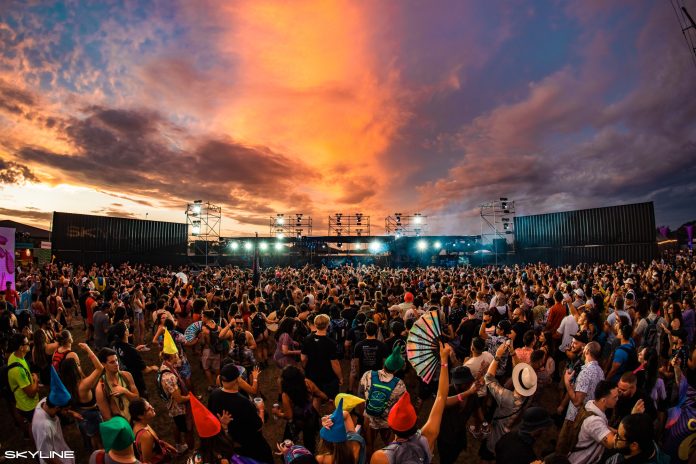 As a festival veteran, it’s not too often these days that I get to experience a brand new festival for the first time. Skyline Orlando is actually in its second year in 2022, but the festival already seems to have found its niche. The brainchild of Insomniac’s Factory 93 and Daytrip festival brands, Skyline is a boutique techno festival taking place in Orlando over Memorial Day Weekend.

While it has plenty of competition and comes right after EDC Vegas, Skyline comes away with rave reviews from all who I spoke with over the weekend. Why? The festival stripped things down to basics and focused on cultivating an intimate underground vibe with an impressive lineup.

This festival did not feature a single LED wall at any of its three stages, but nobody seemed to mind. The mainstage borrowed some of the themes from EDC Vegas’ new Neon Garden setup. It featured shipping containers which created the dance area and then a very basic DJ booth area up front that featured lines of LED lighting, but no screens. At first this seemed like a mistake, but it worked perfectly for artists like Adam Beyer and Eric Prydz. The sets were all very good because the artists knew they were playing to a purist crowd. Eric Prydz, who often gets criticized for closing with ‘OPUS’, closed with fan-favorite ‘Sweet Genesis’ instead. The music was definitely on point throughout.

The festival was certainly crowded, but it also had a nice intimate feel to it as well. There’s something to be said about a single-genre niche festivals because everybody is on the same page musically, and it creates a much better vibe than you’ll find even at your mega-size EDM festivals. The techno scene values space to dance, so there was never any issues with overcrowding or pushing. Once you worked your way up towards the front or the middle of the crowd, you weren’t going to get squeezed in. In fact, the setup was so nice for GA that I barely utilized the VIP access that I had.

Skyline might be a newer festival property but it seems to have found a good home at the Central Florida Fairgrounds. If you’re in the Southeast for MDW 2023, make sure you add this one to your list.