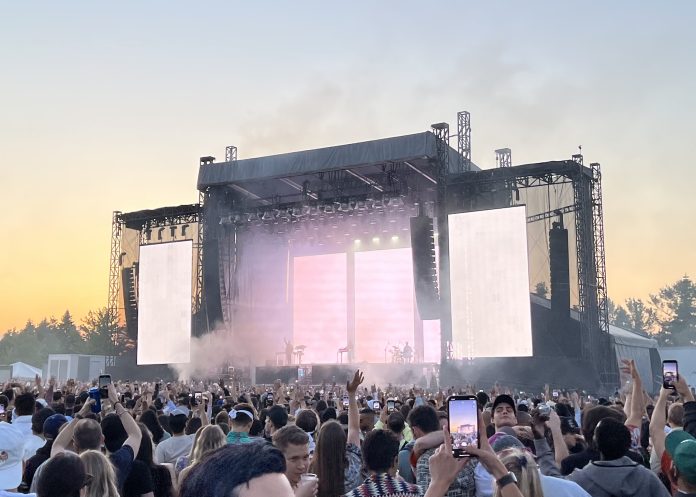 The sun was setting on a beautiful Friday night deep in the heart of Toronto as Rüfüs Du Sol took the stage. Right in the middle of their North American tour, the trio delivered an incredible set for all of Toronto to hear. The venue was set up as a single stage in Woodbine Park that made the show feel like a festival. Coming off a wave of lockdowns, this Toronto crowd felt nothing but joy celebrating together again. You could feel the energy bursting from this massive crowd as they sung along to their favorites. If you still have a chance, don’t miss out on seeing Rüfüs on tour (check here for dates and tickets)!

Unlike many other electronic events that focus on a single DJ, Rüfüs Du Sol breaks the boundaries of how an electronic live set looks and sounds. Lead singer, Tyrone Lindqvist sung with such a distinct and emotionally powerful voice. Categorically, it falls under the voices that actually sound better live.

The setlist featured a number of tracks from their critically acclaimed album ‘Surrender’. The highlights included ‘On My Knees’ along with their Grammy winner for best Dance/Electronic Recording ‘Alive’. Other favorites like ‘Treat You Better’ and ‘Underwater’ resonated strongly with roars from the crowd.

Up next on the tour, Rüfüs Du Sol so will be hitting three massive US cities: Philadelphia, Washington D.C. and New York. After that, the trio moves onto Europe for a slew of shows before coming back to the US to cover the West Coast in the fall. Among the West Coast shows include the famed Hollywood Bowl in Los Angeles, California.