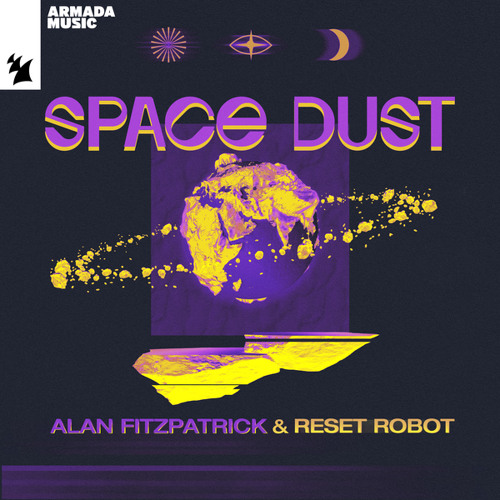 Alan Fitzpatrick is back with his second trance-inspired techno tune on Armada Music. He teams up with Reset Robot again for ‘Space Dust‘. Let me say, it sounds as cosmic as its title. This track follows the success of ‘Lotus‘ which also just released on Armada. Both tracks sound similar in essence but ‘Space Dust’ wreaks more havoc than gravity.

Its tremoring kick drums pair perfectly with the evolving synth melody that echoes in your ears. The bits of cosmic sound bites make you feel the vastness of space. It’s a bit darker in tone than ‘Lotus’ but the tech trance elements remain. According to Reset Robot, they used floating pads and classic trance hooks while retaining their modern techno sound. They even used Alesis Andromeda A6 for most of the track. It’s ethereal and fluid in tempo, resting at a comfortable 135 bpm. The more you listen, the longer you’ll stay in a trance.

“Just like ‘Lotus’, ‘Space Dust’ was born from our mutual love of trance music, and the good ol’ days of ’99 to 2001 in particular. We were hugely inspired by these sounds and wanted to capture some of that vibe through a modern twist that incorporated the edgy techno vibe we are most known for. We were lucky enough to get our hands on a lot of the old hardware equipment that was used in the 90s. So we fired them all up and made ‘Space Dust’ happen.”

The track came alive from the idea of creating something that resonated with their musical pasts. That included trance. Now, both artists use their powers of the underground sound to concoct another masterpiece. Their names are notorious around the world, at the world’s biggest clubs and festivals. Listen to ‘Space Dust’ now.