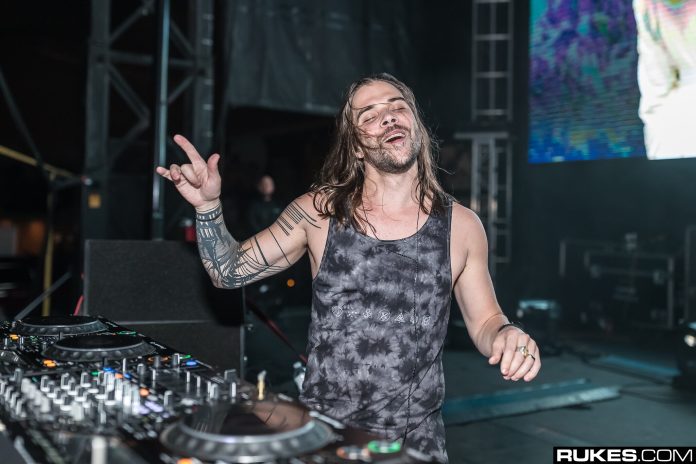 Over the past decade, Seven Lions has cemented himself as one of the most leading pioneers for melodic dubstep in the world. Besides all of his musical accomplishments, Jeff is also the label boss for Ophelia Records. Since creating the label in 2018, it has gone on to become one of the most impactful labels around. Initially starting off as a project for Jeff to put his music out there, it’s become so much more over the past few years. It’s become a celebrated platform that he champions for other artists that have drawn inspiration from his melodic sound and style.

Seven Lions is now gearing up for his next massive milestone and that is the release of his artist debut album, Beyond the Veil. He’s released numerous EP’s over the years but this will be his first full length album.

We had the honor of speaking with Jeff at Electric Zoo where he closed out the Levitron stage as Abraxis on Friday and playing second to last at the main stage on Sunday.

Your fans went crazy when you announced the release of your artist debut album, Beyond the Veil earlier this summer. How come you decided to finally release it after producing music for over 10 years?

It’s mainly because I finally had time to work on it during the pandemic. Otherwise with touring and playing shows, I never would have had time to prepare for the album.

Your second single off of the album, ‘Calling on Me’ with Vancouver Sleep Clinic just dropped today. How did this collaboration come about and where did you find your inspiration for the track?

I was spending a lot of time walking around the forest listening to indie music. I had a lot of time to do that. Vancouver is one of the artists that I listen to a lot and I was working on the song, so I decided to send it to him and he was down. It turned out very natural. A lot of collabs don’t work out where it’s like I love your music and I want you to be on the song.

Speaking about collabs, how did the unreleased one with Rezz come to be?

I think people on Twitter were asking for it and we decided to do it. The track is good, but it’s not good enough in my opinion. So I think we’re going to maybe do something else and maybe do like a little two part kind of thing. It’s a beefy DJ tool but not a proper song. If I’m going to do a collab with Rezz, it’s going to be a proper song.

Any hints on any collaborators that you might have for your upcoming album?

So there’s no collabs on this album. That was one of the things I really wanted to make sure, because I feel like especially with the state of melodic dubstep and electronic music. I wanted to make a statement, you know. This is me. This is what I make. This is what I sound like. Because there’s so many artists that don’t really have that in a way.

What do you do for your hair routine to keep it so luscious?

I wish I had a good one but I don’t. I’m maybe a 4 to 5 day wash. Courtney is usually the one who does the shaving but that’s pretty much it.

What’s the bougiest thing that you have done for your dog?

I’d say it was taking my dog on tour. We took her on a million dollar tour bus and we see her sitting up on the couch like I own this. She’s getting old so I never took her on stage because the bass would be too much for her. I will be taking her on my next tour.

I believe you’re a fan of the new HBO series, House of the Dragon. What do you think about the show so far?

I’m really enjoying it and I’ve got really high hopes, and I hope HBO doesn’t screw it up. I have a really dope home theater set up so I’m holding off on watching the next episode until I’m back. I am also waiting for Lord of the Rings.